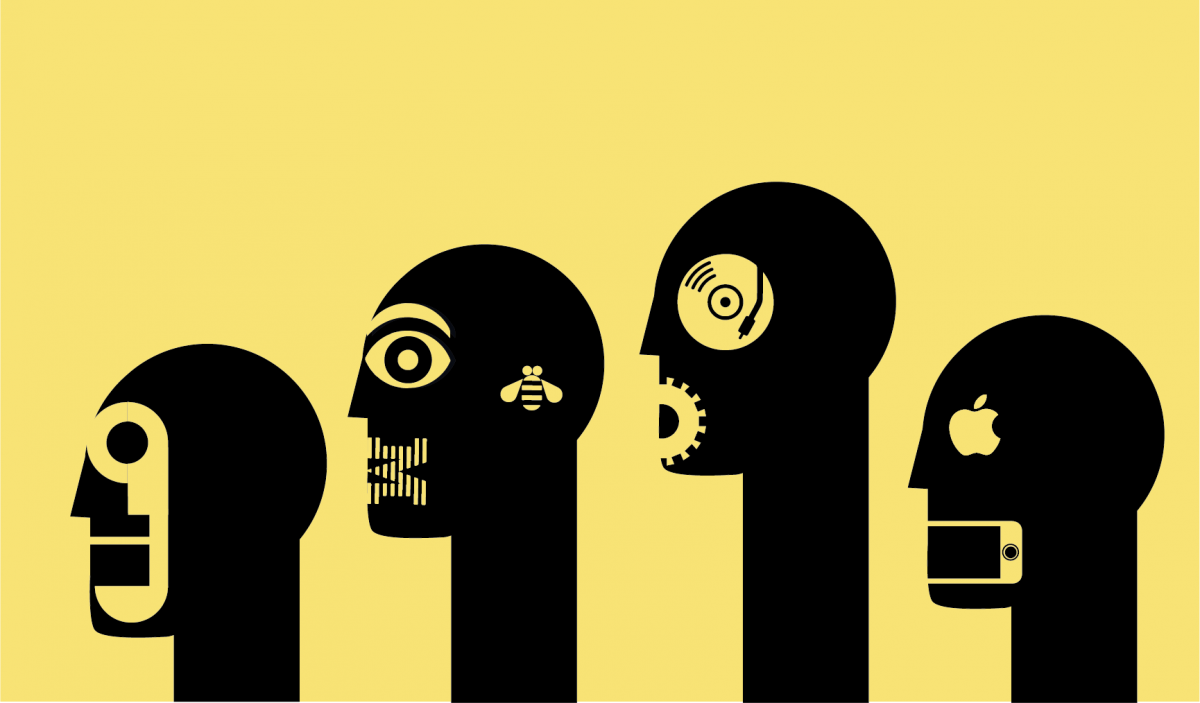 “Everything”, wrote Paul Rand, “is design.” That is a terrific soundbite. An almost imperial statement. Like man landing on the moon and sticking a flag in its surface, it claims for design the territory of everything.

Rand’s world was a modernist place, a mid-century Manhattan in which man-made was best and the world was being remade using plastics and mass media, TV, nylon and space exploration. It was a world of a military–industrial complex and a world in which that could be seen as a good thing. It was simpler – though it would be a mistake to think it was less sophisticated.

Around the same time as Rand was declaring everything to be design, the German designers who had emerged from the Bauhaus tradition (with the enforced break caused by the unpleasantness of the Second World War) were asking “What is good design?” It is, said Dieter Rams, the last great survivor of that post-war generation, “as little design as possible.”

Rams, whose seductively elegant and stripped products for Braun in the 1960s still set the template for contemporary minimalism, is an almost God-like figure to the subsequent generation of designers who have found themselves working in tech and in a world increasingly crowded with stuff. His asceticism can be seen in the designs of Jasper Morrison and in Jony Ive’s world-conquering products for Apple.

Ive has, in fact, made us all slaves to minimal modern design – we are all seduced by the enigmatic smoothness of the iPhone and the iPad, those strange black tablets that seem to have descended from outer space like the monoliths in ‘2001: A Space Odyssey’. These omnipresent slabs have enslaved us, introduced an entire new language of stubbing, picking, poking and swiping. But it was Ive’s boss, Steve Jobs who encapsulated the change his company had wrought.

“Design”, said Jobs, “is a funny word. Some people think design means how it looks. But, of course, if you dig deeper, it’s really how it works.”

And here he hit on the critical change. Whereas the designers of the Bauhaus – Mies van der Rohe, Walter Gropius, Wilhelm Wagenfeld and the others had obsessed over how something could be industrially produced – and how it could be made to look industrially produced – alongside how the product could be made to express its function in its form, Jobs and Ive realised that the new paradigm was the experience rather than the product.

The iPhone and the constellation of iThings are not in themselves the answer – they are gateways to entire worlds of other stuff. Contemporary corporate culture ensnares us with a seductive product into a realm of more products, a consumption which we are tied into. I was in a shop the other day and noticed the sticker album for the Euro 2016 football. Just as when I was a kid the album was a lovely thing, with a free pack of stickers – and it was cheap! A bargain.

But of course, that’s the scam. Once we have the album, we need to fill it with stickers – and some of those stickers are printed in tiny numbers so that we have to keep buying. That’s what these devices are.

This is, in a way, a new world. Whereas we once bought a car or a watch and it would last, something that could be repaired and perhaps even passed on to another generation, now we buy gadgets with an inbuilt obsolescence. Moore’s law and changes in technology mean our devices have a shelf life of no more than a couple of years before either they are outmoded and no longer updatable or we are shamed into buying the newer generation.

If the model was once the conspicuous consumption of a beautifully crafted but eye-wateringly expensive product, now the mode is somewhere between fashion, brand and a model railway layout. It is fashion – but not haute couture – more like the ready-to-wear available in the top-end malls. It is brand, because once we are ensnared into a brand we remain unshakably loyal.

It is precisely the brilliance of Apple, for instance, to persuade us it is giving us what we want before we even know we want it. And it is the model railway because this is a world of limitless consumption. There is always something else to buy, another station, a signaling system, mossy trees, a new locomotive.

The modernist oeuvre from which this new raft of stuff emerged was rigorously ethical and even political. The intention in the early twentieth century was to make good design accessible to the masses. We would have less stuff. We would dispense with the fussy decorative gewgaws of the Victorian house. In the words of William Morris: “Have nothing in your house that you do not know to be useful, or believe to be beautiful.” For Morris this was a revolution, a world in which craftsmen would enjoy making useful and beautiful products, cleansing their lives of industrial overproduction and waste.

For the Bauhaus it was a similarly socialist idea, except their workers would enjoy the conditions of the light and airy modernist factory. But now we have outsourced that manufacture, the conditions of making have become invisible. Now we only think about the design, which is, of course, something done in London studios or Silicon Valley tech hubs. Lord Foster is currently designing Apple’s new Cupertino HQ in the form of a space-age doughnut – a 50s sci-fi throwback. And like those enigmatic flying saucers, it has no visible way in. Even the air-vents are invisible, a self-contained system. Unhackable.

This strange suburban statement, situated on the edge of San Francisco tells us all we need to know about contemporary consumption and design. Apple has more cash than it knows what to do with.

It is, apparently, sitting on a pile of $200 billion dollar notes. With that kind of money it could have built an entire new city, perhaps the greatest city ever known, a model for the future. Instead it is building a frisbee surrounded by a huge car park, a building that resembles GCHQ or the Pentagon in its form more than it does an open, enlightened workplace.

Of course, the world isn’t all going Apple’s way. When the FBI gave up on trying to force the company to provide a backdoor to its phones via the courts, they employed a hacker. There are ways in.

There are also alternative worlds in which designers question everything, the nature of capitalism, consumption, desire. Victor Papanek, the great critic of modern consumption, declared: “There are professions more harmful than industrial design. But only very few of them.”

Designers always think they’re improving the world. But are they? It was this uncertainty that led to the emergence of what’s become known as social design – an idea that grew from the environmental activism of the 1960s and the growing realisation that designers were part of the destructive cycle of consumption and waste that defined corporate capitalism.

Social design takes human relationships, interactions and wellbeing as its mission and not products. It attempts to understand how design thinking can be applied to society. And more recently the emergence of critical design has brought the discipline closer to science fiction than production, promoting an idea that designers’ talents can be turned to speculations of possible futures – dystopias as well as utopias – and that in imagining potential situations, designers and society may be able to accelerate towards the best possible futures, or at least avoid the worst ones.

Rand was very right – everything really does seem to be design. But design as an idea is atomising, morphing from a very concrete modernist notion of streaming industrial production to make things for the masses to a more amorphous concept which can be applied to almost anything like a spray.

Modernist design was a reaction to the nineteenth century notion of ‘applied art’ – the notion that objects would be improved by having art added to them. For the modernists of the twentieth century, design was subtractive, taking things away to expose the essence of the product. Now it has changed again and design is something to be added, but not necessarily in the form of physical decoration or addition. Now design has become something more ephemeral. What is being added now is the ‘narrative’.

I was speaking recently to an architect who was commissioned by an upmarket denim brand to build a new factory. He was delighted with this uber-modernist, functionalist brief. But he was surprised when the owner said they actually needed two factories. Why? One would be for the actual manufacture of the jeans, the other would be a ‘brand experience’, a kind of faux-factory where customers would be kidded into believing they could see the actual wares being made and where they could ‘customise’ their own over-priced product.

This is the much-vaunted storytelling that is slowly supplanting design as the key to customer experience. The graphic designer Stefan Sagmeister recently posted a brilliantly provocative video, which he entitled ‘You are not a storyteller’. In it he blasts the contemporary fashion for applied narrative, relating an anecdote about a rollercoaster designer who describes designing the rides as a kind of storytelling. “That’s a fucking bullshit story,” Sagmeister replies, “that’s boring.” Why, he asks, is it not enough just to design an exciting ride? He picks a hole in what has become a cliché, an idea borrowed from marketing departments and applied to the whole process. For Sagmeister, and perhaps for many others also, the shift from designer to storyteller is a demotion, a diminution of what they do. It is the replacement of ‘meaning’ with ‘narrative’, the substitution of a story for the substance of a well-designed product.

The modernist urge to use design to improve everyday life has long been sacrificed to consumer culture, to the impetus to keep people buying beyond what they need. When even the chief executive of IKEA informs us that we have reached ‘peak stuff’, we know that something is changing. But for design to remain relevant and to maintain any semblance of an idea that it is still doing good we will have to look beyond the chairs on show at the Milan Salone, beyond the ads in glossy mags, beyond the brand narratives and out to the further reaches.

It may be in social design, in urban design, in a new architecture for the informal settlements or in critical or design thinking, but design urgently needs to understand where it is going and what the point of the journey might be. Perhaps it needs a narrative.

About Edwin Heathcote
Edwin Heathcote is a writer, designer and architect living and working in London. He has been the Architecture and Design Critic of the Financial Times since 1999 and is the author of around a dozen books including, most recently, ‘The Meaning of Home’.

He is a columnist for GQ magazine and is a regular contributor to international design journals. He is also the founding editor of Reading Design, a free online archive of contemporary and historical writing on design.