Why its time to brand Korea

Imagine if the Empire State Building grew 50 metres before tipping horizontally and launching into the sea. This is the length of the world’s biggest ship, currently being built by Samsung in Korea. Upon completion, The Prelude will measure 487 metres, and will have the capacity to store the equivalent of 175 Olympic swimming pools in liquefied natural gas.

A Korean company was also responsible for the construction of the world’s tallest tower, the Burj Khalifa in Dubai which measures 828 metres.

Yet despite all of this, Korea is still more widely known for ‘Gangnam Style’ and its noisy neighbour.

The problem is that leading companies like Samsung, LG and Hyundai are not associated with Korea. Until recently, Korea feared its brand association would cause a ‘brand deficit’, having a negative impact on its businesses. So the two remained separate, and consequently weaker.

A compelling nation brand has many benefits. It is a good way of attracting foreign investors. It can improve both the export potential of a country’s output as well as reduce the import of goods.

Now Korea has plenty to talk about, making it the perfect time for businesses to collectively build associations and publicise their exports as ‘Made in Korea’. In a virtuous circle, the newly-endorsed products will serve to further strengthen the Korean brand. Global consumers will associate Samsung, LG and Hyundai with Korea, and they will become all the more desirable because of it.

A compelling nation brand has many benefits. It is a good way of attracting foreign investors. It can improve both the export potential of a country’s output as well as reduce the import of goods. A strong nation brand can be used to market a country to its own citizens and promote domestic tourism, keeping economic activity and cash flows within a nation. Of course it can also be used to market international tourism, which is an important source of income for many economies around the world.

The UK government identified a unique opportunity to improve the UK’s profile during the London Olympics in 2012. The GREAT Britain campaign comprised of a cross-governmental strategy covering areas of investment, export of goods and services, and domestic and international tourism. 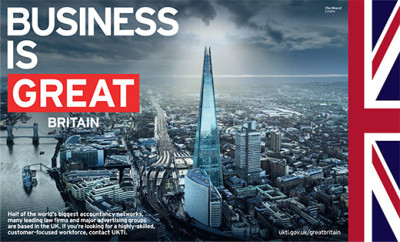 Organisations like UK Trade & Investment and Visit Britain used the campaign to target selected markets and cities. UK Trade & Investment organised a series of trade missions to high-priority foreign markets like Korea (from which Industry has recently returned). Following the Olympics, national tourism agency Visit Britain launched the “Memories are GREAT’ campaign to encourage overseas visitors who had watched the coverage of the games to come and experience the real thing for themselves.

The Nation Brands Index demonstrates how global opinion of the UK has improved since London 2012. The overall ranking of the UK has risen from 5 to 4. The annual survey involving fifty countries found that 63% respondents said that London 2012 has “increased their interest in visiting [the UK] for a holiday”. 75% who saw the coverage agreed they wanted to see “more [of the UK] than London.”

By leading the brand from the top, the UK government ensured a fully-integrated and cohesive campaign that was maximised by the international attention focused on Britain for the Olympics.

The Pyeongchang Winter Olympics in 2018 provides a perfect opportunity to launch Brand Korea and consolidate its international brand image. Beijing 2008 told the world the story of China’s rapid economic development, while Vancouver 2010 issued a global invitation to a vibrant, cosmopolitan hub, and London 2012 reminded the world of Britain’s relevance as a creative economy. A fully-integrated nation brand strategy would enable the government to publicise its many accomplishments. After all, Korea is home to some of the top global brands. In the Brand Finance Global 500 2013 Samsung ranked 2, Hyundai ranked 30 and LG ranked 90. However, in the Anderson Analytics survey of American college students’ knowledge of global brands, only 10% knew Samsung was Korean. 42% thought LG was an American brand.

Pyeongchang 2018 should bring together the heritage, the innovation, and the expertise of Korea to demonstrate the true sum of its parts. This will create an attractive brand for global consumers to buy into. It’s time to show the world how much Korea has to offer.